Resident Evil: UC will take good use of the Wii's control system to offer a new and more immersive sense of control to players.

This is a Wii exclusive game but it's not yet sure when this game will be released. You can watch a 32 seconds trailer at Capcom's website. The Umbrella Chronicles will reveal the story behind the fall of the Umbrella Corporation and will feature locations from RE 0, 1, 2 and 3 as well as never seen before locations like the Umbrella's stronghold.

Capcom also announced they are working on a Wii version of Resident Evil 4, this game should be available by the end of next month at a budget price. As Leon Kennedy players will have to explore a town overrun by cultists, mutants and mind-controlled villagers. In both games the Wiimote is used to aim, fire, slash and avoid oncoming adversaries while the Nunchuck is used to move around. 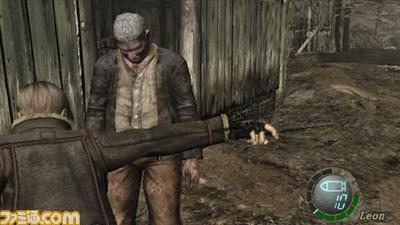 Some more details and screenshots are available at Capcom's website but it's all in Japanese.