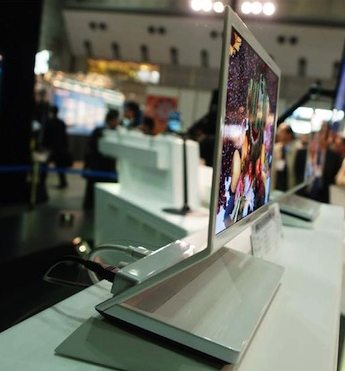 Gadget site Gizmodo spotted some of Sony's OLED displays at a display forum. The panel on the picture on the right is only 3mm thick.

"LCD and plasma displays look faded in comparison," said a Denso employee who declined to be named, fighting to take a picture of the new TVs.

OLED displays are already used in digital cameras, cellphones and other devices with relatively small panels. But cost and technology hurdles have so far prevented them from being mass produced for use in larger equipment such as TVs.

The OLED TV to be launched this year will be made by ST Liquid Crystal Display Corp., a joint venture between Sony and Toyota Industries Corp., Sony spokesman Daiichi Yamafuji said, declining to give unit targets or a likely price.

Sony has invested aggressively in LCD technology and is now the world's largest player in the LCD TV market. It makes big LCD panels in a joint venture with South Korea's Samsung Electronics.

Sony aims to start producing 11" OLED displays, not really big but it's a start.