Scarface: The World is Yours (Wii) previewed

Posted on Friday, Apr 13 2007 @ 09:10 CEST by Thomas De Maesschalck
The guys from ShackNews had a chance to check out the upcoming Scarface game for the Nintendo Wii console:

As in most Wii games, the nunchuk's analog stick is used to control character movement. When no firearm is selected, the Wii remote pointer controls the camera in a similar manner to first person shooters on the system, such that the view rotates as the cursor is drawn closer to the edges of the screen. When Tony is shooting, the cursor becomes an aiming reticule. This version of Scarface retains the lock-on system that allows the player to adjust the position of the reticule to target specific body parts after having locked on to an enemy (resulting in phrases like "Left Nut, +60 Balls" showing up on the screen). Of course, rather than being adjusted with an analog stick, this precision aiming is adjusted with the Wii remote. The combination of a lock-on mechanic with the pointer-based aiming works extremely well with the Wii pointer and takes little time to internalize.. 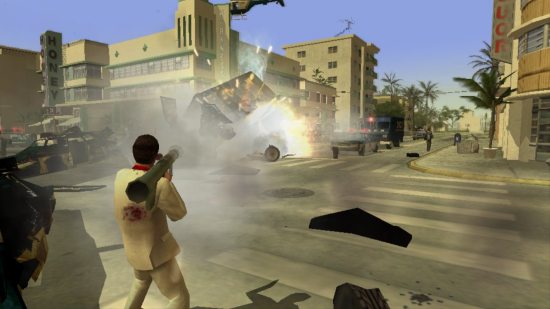