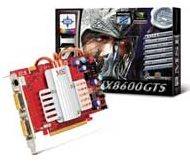 News has reached my inbox that MSI has officially launched their GeForce 8600 GTS, GT and GeForce 8500 GT based graphics cards. I expect similar announcements from other graphics cards makers will follow later today and that the web will be flooded with reviews.

MSI launched five DirectX 10 compatible graphics cards: The first two cards with the "HD" extension in their name support HDCP. The overclocking editions are overclocked from 675MHz to 690MHz and have 1050MHz memory instead of 1000MHz memory.