UEFI showed off at IDF - to replace BIOS? 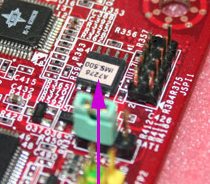 John Du, General Manager of Intel China, presented some of the future plans with Unified Extensible Firmware Interface (UEFI), a new chip that may replace the good old BIOS.

The BIOS chip found on today's motherboards is already 22 years old and it's getting harder and harder to find people who know how to program for it. The BIOS only understands Assembly code, which is a very low-level language - this means it comes very close to machine language.

Bit Tech has some details about UEFI:

UEFI is the future of computing firmware that Intel has been trying to push for some time. It has a more open interface and not only is better in software by using that higher level language code but the physical hardware to contain occupies about a 10th of the footprint a normal BIOS uses.

Current BIOS’ are pushed to their absolute limits and are very complicated to understand and diagnose. The instability of many modern motherboards is mostly due to BIOS problems, and quite a few people, including ourselves, regularly complain about the state of motherboards recently released on the market.

The spate of problems with early production runs can be traced back to the shortage of qualified and experienced BIOS engineers, people who are skilled enough to write and diagnose a BIOS, making it compatible with all hardware iterations as well as being super-overclockable and able to run ultra fast memory timings.

Very few motherboards have BIOS as comprehensive as the DFICFX3200 T2R/G, but that’s because legendary engineers like Oskar & Jarry employed at DFI, are extremely few and far between.

UEFI allows for far more creativity and modularity in the BIOS area as well, by expanding the use of a higher level language code meaning more people are available to code for it. This makes it easier to optimise, diagnose and layer, as well as providing far better performance allowing for a faster system boot up.

Hardware makers are still reluctant to use UEFI, one of the reasons is because Microsoft's Windows operating system doesn't support it. However, according to a spokesperson from AMI, Microsoft will roll out an update in the fourth quarter of this year which will add UEFI support to Windows Vista. This should definitely boost the adoption.