Intel shows off PRAM and SSD at IDF 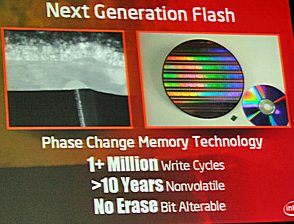 The next generation will potentially use Phase Change Flash Memory technology which offers 1+ million write cycles and bit-erase like NOR, not block-erase like NAND. Being non-volatile it allows >10 years non-volatile secure storage, providing the interface doesn’t change in the meantime.

Phase change does exactly what it says on the tin, whereby depending on which phase it's in; it offers different electrical properties that can be read as a 0 or a 1. Changing phase means it converts the necessary chemical (likely a crystal) from a solid to a liquid or vice versa if it receives an electrical stimulus.

Phase change technology has even been touted to have the opportunity to replace traditional DRAM in the future, although nothing has yet been detailed.