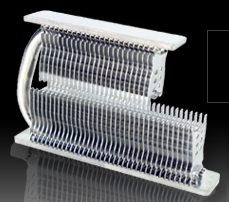 ThermalRight presents its new HR-09 heatsinks to cool MOSFETs on your motherboard:

The increasing density of MOSFETs on an integrated circuit is creating problems of localized heat generation that can impair circuit operation. Circuits operate slower at high temperatures, and have reduced reliability and shorter lifetimes. MOSFETs are at risk of thermal runaway. As their on-state resistance rises with temperature, the power loss on the junction rises correspondingly, generating further heat resulting in destruction of the device.

For the above reasons, many motherboards now have their own heatpipe cooling system designed by the motherboard manufacturers. But during our research test, we found out that the northbridge chipset can run especially hot and when you increase voltage, the temperature increased many times over. The heatpipe cooling system just does not have enough surface area to cool those hot devices equally AND sufficiently.

Many end-users also have written to us in regards to the above issue. They got tired of gimmicks and low grade thermal solutions. What they needed was something real, something that actually cools the MOSFET, and so we went to work and developed a new product called HR-09 (from High-Riser series) MOSFET cooler.

The HR-09 MOSFET cooler with its patented design will expand your system’s life expectancy and creates a stable condition not only during normal operation but also when you increase the frequency and voltage to overclock. Now heat is no more an issue.

The HR-09 comes in two distinctive designs and types (sold separately); HR-09U and HR-09S. The difference lies in positioning and orientation of the fins and heatpipe. For HR-09U, which fits most major motherboards, sits upright. It is the choice when you have no obstacles to hinder the installation of HR-09U. As for HR-09S, which sits at a slant angle, would be the choice when you have a big CPU heatsink such as the SI-128 and have limited space on your motherboard. But whatever the choice you make between HR-09U and HR-09S, know that you have nothing but the best quality and performance…now working for your MOSFET.