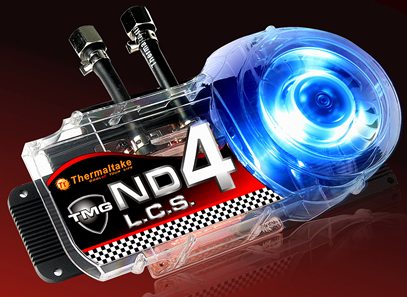 TMG ND4 is founded on Thermaltake’s current TMG product line which incorporates high performance with silent operation. The firm says Asus is already using this cooler on their Asus 8800 GTX Top graphics card which was launched at CES 2007.

The ND4 waterblock removes heat from the GPU and dissipate it through the AquaTank, also know as Thermaltake TideWater (the integration of radiator, reservoir, and mini pump). This combination of high end liquid cooling graphic card is tested to be 11% faster than other 8800 GTX cards and at least 12 degrees cooler.

The silent LED fan equipped on ND4 is only 18dBA, and the all copper waterblock and aluminum base dissipate heat from both GPU and memory of the graphic card. Special fan shroud concentrates the airflow and focuses the air to the hotspot for better cooling capability.