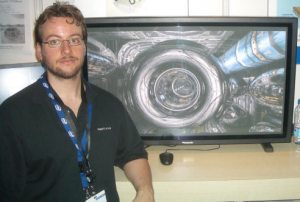 Last week at the Intel Developer Forum, Daniel Pohl from Intel showed off a demo of raytracing in Quake 4. Raytraced Quake 4 casts one ray per pixel by default and looks a lot better than games that use standard raster graphics.

The reporter says four quad-core systems were needed to play the demo at an almost playable frame rate.

This means a Tigerton system should be more than able to render this on a CPU with a GPU there simply to throw pixels on the screen.

There is another raytracer at Intel that will so the same job on a single QC CPU, so this is not a job for a Tyan Typhoon anymore, you can do it on a Kentsfield box now. In a year, this will be quite acceptable on a mid-range machine, and in three, you will have to wonder why you need GPUs anymore. Oh wait, that is no surprise, it is already faster on a Kentsfield than a G80.

If you want to do the same colored lights trick that Epic pulled off in UE3 a few GDCs ago, you can, and you get 100% correct shadows thrown in for free. You also can do physically correct glass shaders, reflection and refraction.

If you have the CPU power to spare, you can also cast more than one ray per pixel and get the equivalent of AA and AF. With 16X AA, you obviously need 16x the horesepower, but that is already on the roadmaps.