The Settlers: Rise of an Empire announced

Posted on Friday, Apr 27 2007 @ 03:06 CEST by Thomas De Maesschalck
Ubisoft announced Blue Byte is working on the sixth Settlers game. This new game will feature a lively medieval game world and will be launched in September 2007.

Here are some more details about Settlers: Rise of an Empire:

– The primary objective of the game is to create large, lively medieval towns.

– The settlers interact with each other in a completely natural way and have wants and needs of their own.

– Female settlers appear for the first time in the series: Men and women fall in love with each other and marry.

– The lively, detailed game world is rich in animal and plant life.

– The settlers' busy life is presented in lovingly rendered animations that show what is going on in a transparent way.

– The world is divided into four climatic zones with changes of season and weather which influence expansion and resource gathering.

The best Settlers game of all time, featuring the best from previous games and lots of gameplay innovations!

– All interventions by the player are reflected in the behaviour of his subjects and made transparent through the animations in the game world.

– Starting with a small settlement, the player builds up flourishing towns, maintains trade relations, and claims land and villages. This requires diplomatic skills.

– Mining, gathering resources, and food production result from wise planning and the various occupations of the settlers.

– Upgrading buildings step-by-step improves the effectiveness of the economy and towns.

– By hiring travelling entertainers and organizing fairs, the player acts as a matchmaker by enabling male and female settlers to get to know each other.

– The player can build walls to protect his towns from enemy attacks. In military actions, the player must prove that he has built up his empire in such a way that it can defend itself effectively.

– Included in the game: dynamic single player campaign, freeplay mode with a multitude of maps, numerous multiplayer options via LAN and Internet, and a map editor. 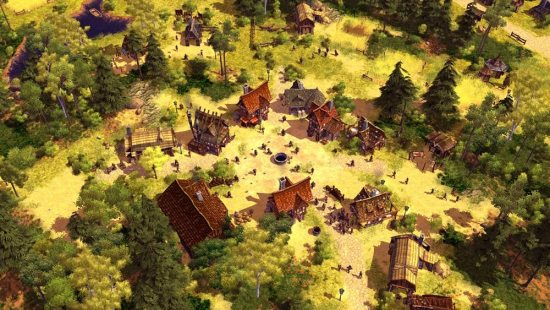