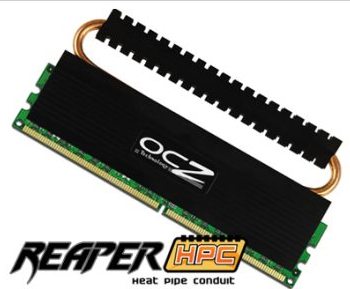 OCZ presents two new memory kits which use the Reaper HPC cooling. Both are PC2-6400 modules. They have the new PC2-6400 Reaper and the PC2-6400 Reaper Enhanced Bandwidth Edition which is designed for optimal performance on the nForce 680i chipsets.

As one of OCZ’s legendary Enhanced Bandwidth (EB) editions, the PC2-6400 Reaper EB increases effective memory bandwidth through the optimization of memory latencies between the system memory, the chipset, and memory controller. At 800MHz, the Reaper EB edition is rated for 4-3-3 timings on 680i platforms, while the standard PC2-6400 Reaper is rated to run CL4-4-4.

These unique DDR2-800 modules feature the Reaper HPC (Heat Pipe Conduit) heatspreader which is engineered to deliver superior silent heat dissipation over traditional heatspreaders. The Reaper HPC is an cooling solution developed by OCZ to effectively minimize heat produced by high-speed memory. As heat rises into the thermo-conductive copper heat pipe conduit, it is dissipated through a compact aluminum fin array. By strategically guiding performance-robbing heat away from key memory components, the unique Reaper HPC design maximizes passive cooling to improve longevity and stability of the modules.