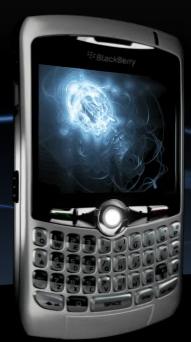 RIM just launched its BlackBerry Curve - a new smartphone with a full QWERTY keypad. The unit has a 320 x 240 pixel display and features a 2 megapixel digital camera with built-in flash and 5x digital zoom.

It is a full-featured smartphone with a full QWERTY keyboard and large display and yet it boasts an small and lightweight design at 4.2'' x 2.4'' x 0.6'' and approximately 3.9 oz. The device only has 64MB flash memory but you can expand this with 2/4GB microSD memory cards.

A powerful new desktop media manager is also included with the BlackBerry Curve. The Roxio Media Manager for BlackBerry, which was developed with Sonic and based on the award-winning Roxio Easy Media Creator 9, introduces a new level of simplicity, allowing users to easily search for media files on their computer, view and organize them, create MP3 music files from CDs, add audio tags, create playlists and automatically copy or convert pictures, music and videos for optimal playback on the BlackBerry Curve.

The media manager also includes Roxio Photosuite 9 LE, a comprehensive tool that makes it easy to edit pictures and create photo albums. With PhotoSuite, pictures can be cropped, rotated and straightened, and flaws can be fixed by removing redeye or changing the brightness, contrast and saturation levels. Pictures can even be enhanced with color filters and special effects.

The media player on the BlackBerry Curve has been refined, allowing users to search for music by simply typing the title, genre, artist or album name. Videos can also be played in full screen mode.

The phone has a standby time of 408 hours and a talk time of 240 minutes. RIM says the Curve will be available this Spring.