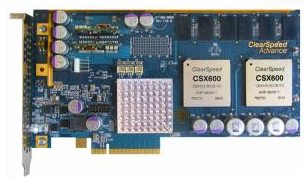 According to the firm their new chip dramatically improves the performance, while barely increasing the power consumption. ClearSpeed claims the new CSXL libraries consolidate deliver 20 times the performance per watt compared with industry standard servers when running the LINPACK benchmark. According to ClearSpeed their accelerator board uses only 25W.

The CSX600 processor core found on the accelerator boards is composed of 96 processing cores capable of 64-bit double precision and can output more than over 55 GFLOPS DGEMM. The 15mm-square die size is composed of 128 million transistors, 47 percent of which is logic—about half of that is dedicated to floating-point units—and the remaining 53 percent is memory. IBM manufactures the processor on an eight-layer copper 0.13µm FSG process and Flextronics assembles the board.