Yesterday our friends from FUD Zilla claimed that the Radeon HD 2900 XT gets extremely hot, their sources informed them that the card reaches temperatures of up to 100°C.

Today they got some photographic evidence to back this up. It shows the Radeon HD 2900 XT outside a case with a thermometer indicating that the card reached a temperature of 82°C in a room with a temperature of 20°C:

There is a catch in 2D mode, as the temperature will be stable at about 58 degrees. In 3D mode the R600 chip heats up to an average of 68.4 degrees or in worst case scenario 71.3 degrees. In a closed case environment the situation gets even worse, so you can expect even more than 82 degrees, not far off the 100 degrees that we originally reported. 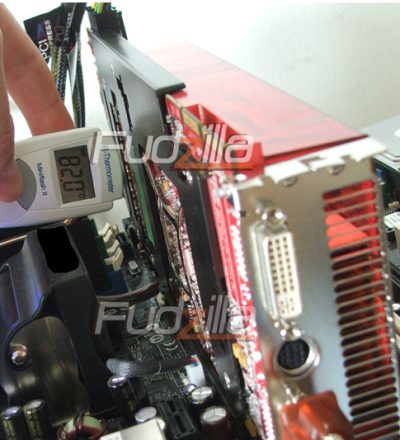 Who knows how hot the Radeon HD 2900 XTX will get.