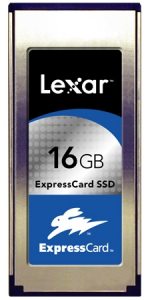 Lexar has a new solid state drive for notebooks, the drive ships in capacities of 4GB, 8GB and 16GB and can be easily installed in your ExpressCard slot.

Roughly half the size of current PC Card solutions, the Lexar ExpressCard SSD is a high-capacity removable solid state drive (SSD) that promises to set a new standard for delivering high-performance, lower-cost storage expansion to notebook computers. The Lexar ExpressCard SSD comes bundled with auto-backup software, an innovative solution for protecting laptop computer files and data that allows for automatic regular (daily, weekly, or monthly) backup without user intervention after the initial setup. During this setup, the user will be able to set the folder and specific file types to be included or excluded from the backup process. In addition, this automatic backup software can also support multiple computers by recognizing the computer name and the appropriate backup setting for each computer.

The Lexar ExpressCard SSD is also ideal for use with Windows Vista as it is enhanced for use with ReadyBoost, a Vista feature that improves your system performance without having to add DRAM to your computer. The ExpressCard SSD serves as an additional memory cache, which is a reserve section of memory that the computer can access faster than if it were accessing data from the hard disk drive. Additionally, the ExpressCard SSD interface supports a direct connection to the chipset, allowing users to enjoy all of its extensive backup and ReadyBoost capabilities without having to unplug the card after every use; users simply keep their ExpressCard SSD in the slot as external storage.

Pricing details aren't available but I bet it won't be cheap.