Posted on Sunday, May 06 2007 @ 10:27 CEST by Thomas De Maesschalck
The New Horizons spacecraft from NASA has made some nice photos of the Jupiter system. This includes stunning views of the gas planet's atmosphere, rings, moons and magnetosphere.

These new views include the closest look yet at the Earth-sized "Little Red Spot" storm churning materials through Jupiter's cloud tops; detailed images of small satellites herding dust and boulders through Jupiter's faint rings; and of volcanic eruptions and circular grooves on the planet's largest moons.

New Horizons came to within 1.4 million miles of Jupiter on Feb. 28, using the planet's gravity to trim three years from its travel time to Pluto. For several weeks before and after this closest approach, the piano-sized robotic probe trained its seven cameras and sensors on Jupiter and its four largest moons, storing data from nearly 700 observations on its digital recorders and gradually sending that information back to Earth. About 70 percent of the expected 34 gigabits of data has come back so far, radioed to NASA's largest antennas over more than 600 million miles. This activity confirmed the successful testing of the instruments and operating software the spacecraft will use at Pluto.

"Aside from setting up our 2015 arrival at Pluto, the Jupiter flyby was a stress test of our spacecraft and team, and both passed with very high marks," said Science Mission Directorate Associate Administrator and New Horizons Principal Investigator Alan Stern, NASA Headquarters, Washington. "We'll be analyzing this data for months to come; we have collected spectacular scientific products as well as evocative images." 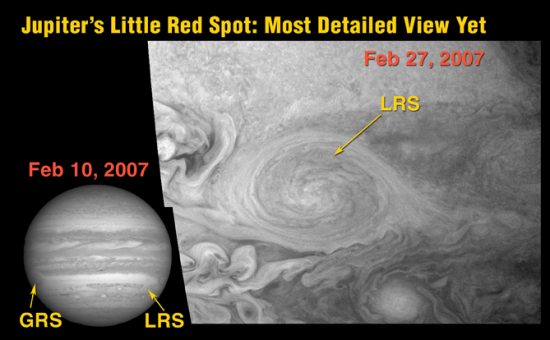 More details over here and more images over here.