Posted on Wednesday, May 09 2007 @ 01:00 CEST by Thomas De Maesschalck
NASA reports their Chandra X-Ray Observatory has recorded one of the brightest supernova explosions ever seen. This discovery indicates that violent explosions of extremely massive stars were relatively common in the early universe, and that a similar explosion may be ready to go off in our own galaxy.

"This was a truly monstrous explosion, a hundred times more energetic than a typical supernova," said Nathan Smith of the University of California at Berkeley, who led a team of astronomers from California and the University of Texas in Austin. "That means the star that exploded might have been as massive as a star can get, about 150 times that of our sun. We've never seen that before."

Astronomers think many of the first generation of stars were this massive, and this new supernova may thus provide a rare glimpse of how the first stars died. It is unprecedented, however, to find such a massive star and witness its death. The discovery of the supernova, known as SN 2006gy, provides evidence that the death of such massive stars is fundamentally different from theoretical predictions.

"Of all exploding stars ever observed, this was the king," said Alex Filippenko, leader of the ground-based observations at the Lick Observatory at Mt. Hamilton, Calif., and the Keck Observatory in Mauna Kea, Hawaii. "We were astonished to see how bright it got, and how long it lasted."

The Chandra observation allowed the team to rule out the most likely alternative explanation for the supernova: that a white dwarf star with a mass only slightly higher than the sun exploded into a dense, hydrogen-rich environment. In that event, SN 2006gy should have been 1,000 times brighter in X-rays than what Chandra detected.

"This provides strong evidence that SN 2006gy was, in fact, the death of an extremely massive star," said Dave Pooley of the University of California at Berkeley, who led the Chandra observations.

The star that produced SN 2006gy apparently expelled a large amount of mass prior to exploding. This large mass loss is similar to that seen from Eta Carinae, a massive star in our galaxy, raising suspicion that Eta Carinae may be poised to explode as a supernova. Although SN 2006gy is intrinsically the brightest supernova ever, it is in the galaxy NGC 1260, some 240 million light years away. However, Eta Carinae is only about 7,500 light years away in our own Milky Way galaxy.

"We don't know for sure if Eta Carinae will explode soon, but we had better keep a close eye on it just in case," said Mario Livio of the Space Telescope Science Institute in Baltimore, who was not involved in the research. "Eta Carinae's explosion could be the best star-show in the history of modern civilization."

Supernovas usually occur when massive stars exhaust their fuel and collapse under their own gravity. In the case of SN 2006gy, astronomers think that a very different effect may have triggered the explosion. Under some conditions, the core of a massive star produces so much gamma ray radiation that some of the energy from the radiation converts into particle and anti-particle pairs. The resulting drop in energy causes the star to collapse under its own huge gravity.

After this violent collapse, runaway thermonuclear reactions ensue and the star explodes, spewing the remains into space. The SN 2006gy data suggest that spectacular supernovas from the first stars - rather than completely collapsing to a black hole as theorized - may be more common than previously believed.

"In terms of the effect on the early universe, there's a huge difference between these two possibilities," said Smith. "One pollutes the galaxy with large quantities of newly made elements and the other locks them up forever in a black hole." 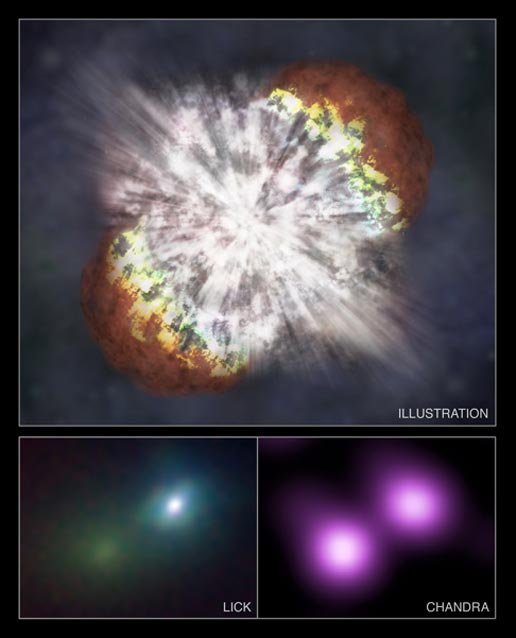 Note: The upper image isn't the actual supernova, it's an artist impression of what it may look like.