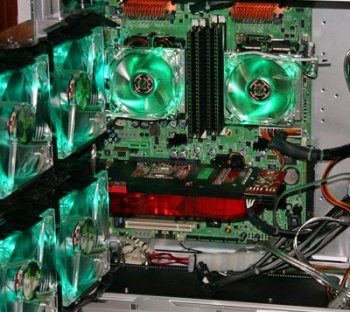 Besides a 300mm wafer with 45nm chips, AMD also showed off a working 8-core Agena FX PC at the press event in Monterey.

TG Daily has all the details:

Among the product demos that AMD brought along, especially two products stood out: First, the company showed off the Agena FX quad-core processor, running in tandem with ATI R600 graphics cards as well as DDR2-1066 memory in two test systems. Agena FX is the desktop version of the “Barcelona” Opteron quad-core processor and is scheduled to be launched sometime after Barcelona, which apparently is still on track for a mid-2007 introduction.

AMD had two systems on display, a single-socket “Hammerhead” quad-core Agena FX system as well as a “Wahoo” dual-socket eight-core system, which extends AMD’s dual-socket enthusiast system approach. Details about Agena FX, which is rumored to launch with clock speeds up to 2.9 GHz, were not disclosed and AMD avoided showing any benchmark performance numbers. However, the eight-core system was able to convert 720p video from one format to another (the company declined to comment on file formats) in real time – while maxing out all eight cores at the same time.

AMD also showed off a Stream Processor with a demo of real-time face recognition on a GPU.