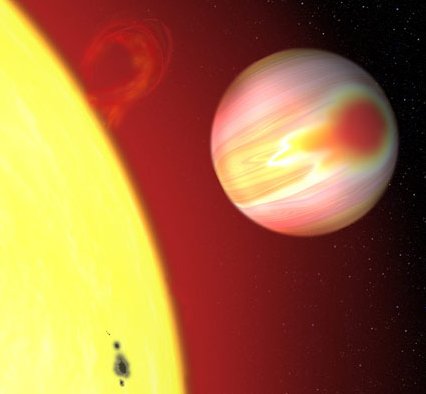 One of the studies investigated a hot Jupiter planet with fierce, hot winds that sweep heat from the planet's daylight side to its dark, nighttime side. Another study found a planet as black as coal that absorbs nearly all the light that hits it, re-emitting the energy as extraordinary heat:

The pitch-black world, the smallest known planet outside our solar system, is also one of the hottest: a whopping 3,500 degrees Fahrenheit (1,925 degrees Celsius), the study found.

Because hot Jupiters are so close to—and always have one side facing—their stars, most scientists have expected that dramatic temperature differences would exist between the worlds' daylight, or star-facing, sides and their nighttime sides.

To test this theory, Harvard University graduate student Heather Knutson and her colleagues observed a hot Jupiter in the constellation Vulpecula using the Spitzer Space Telescope. They then used that data to develop a temperature map of the planet's surface.

The team found only a relatively minor difference in temperature—about 500 degrees Fahrenheit (280 degrees Celsius)—between the day and night sides.