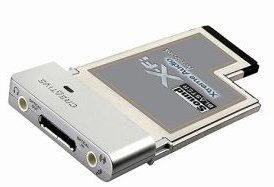 Fud Zilla reports Creative is rolling out new X-Fi sound cards that use the ExpressCard slot so they can be used in most notebooks. Currently they are already available in Japan but they will probably soon be available in other parts of the world for about 79EUR.

The Sound Blaster X-Fi Xtreme Audio Notebook as it is called is designed to fit an ExpressCard 54 slot on your notebook. The only problem here is that some notebooks only have ExpressCard 34 slots (the number refers to the width of the slot in mm), such as Apple's MacBooks.

The Sound Blaster X-Fi Xtreme Audio Notebook offers 7.1-channel sound for your notebook via a breakout cable. It also adds optical in and out, a headphone socket and a combined mic/line in jack.

It features the X-Fi 24-bit Crystalizer and the CMSS-3D functions, but for some reason it seems to lack EAX Advanced HD 5.0, which indicates that his is an entry level X-Fi card.