Google added an impressive update to Google Maps today. From now on some select streets will be available in 3D. This means you can virtually walk through streets and change the camera angle.

It's pretty awesome but the amount of locations that have this kind of 3D imagery are extremely limited. 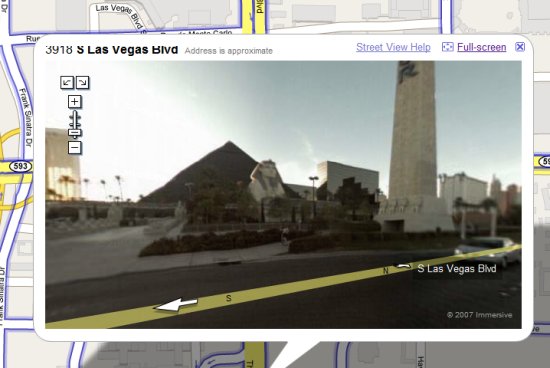 O'Reilly has some background info:

Greg Sadetsky of Poly9 tipped me off to this release. He has done quite a bit of technical due diligence on the product. He has deduced that this has been launched in "Denver, Las Vegas, Miami, New York and San Francisco". When I met with Immersive Media they had many more cities than this mapped, so expect more to come soon. Greg also noticed that they are using “Keyhole Server 2.4″ in the server and wonders if this will be available in Google Earth soon. My bet, yes. He also decompiled the source code for the flash viewer and made several other discoveries list on his blog post. Thanks Greg!

Michael T. Jones, Chief Technologist of Gogle Earth informs me "Only some of the Street View data is from Immersive, but not all of it. We have our own platforms and also license data from Immersive and others. San Francisco & South Bay are collected by us at greater resolution than Immersive."