PQI 256GB SSD - but for industrial use 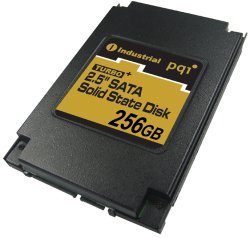 PQI launched the first 256GB solid state disk this week for industrial use: