Posted on Monday, Jun 04 2007 @ 06:22 CEST by Thomas De Maesschalck
The guys from X-bit Labs took a look at the new Fatal1ty FP-IN9 SLI mobo from Abit. This motherboard is based on the NVIDIA nForce 650 SLI chipset:

At this time only Nvidia nForce 650i SLI based mainboards are worthy competitors to Intel P965 Express based solutions, that is why we decided to pay special attention to them on our site. We have already offered you Asus P5N-E SLI Mainboard Review, which should be considered a basic article. It discusses not only the peculiarities of this particular mainboard, but also the chipset features in general. After that we introduced to youMSI P6N SLI Platinum and ECS NF650iSLIT-A that are also based on Nvidia nForce 650i SLI. Today we are going to add one more solution to this list: abit Fatal1ty FP-IN9 SLI mainboard. 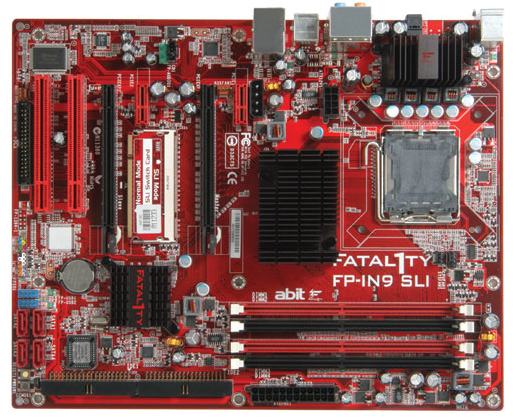 You can read the review over here. Overall they don't really recommend this motherboard because of its poor overclocking performance and the lack of Command Rate 1T setting. But they hope that future BIOS revisions will fix these issues.