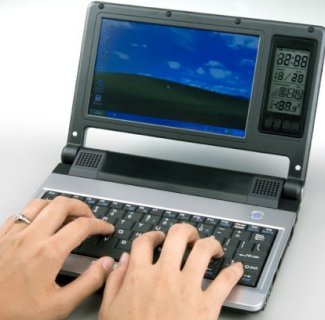 VIA presents a new ultraportable notebook, the VIA NanoBook. The device is really small and should cost about $599:

The NanoBook runs on either Windows XP or Vista, weighs less than 850g (1.87 pounds), and sports a 1.2GHz VIA C7-M processor, up to 1GB of RAM, a 30GB hard drive, a 7-inch WVGA display, 802.11g WiFi, Bluetooth (they don't specify which kind), DVI-out, a slot next to the screen where you can pop in a GPS, VoIP, or WWAN module (the module in the pic above is some world clock thing), and up to five hours of battery life. Packard Bell has already signed on to use the reference design as the basis for the EasyNote XS, which is due out in Europe later this year; VIA tells us that at least one other OEM is on-board, but they weren't ready to announce who it was yet.