More evidence for Mars' wet past 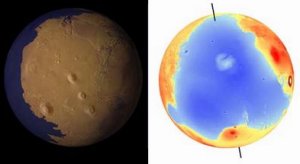 Scientists have found more evidence that long ago Mars was covered with water.

Scientists have found new evidence to support the presence of large oceans on Mars in the past. Published in the June 14 issue of Nature, the research suggests that changes in Mars’ orientation with respect to its axis might be responsible for large variations in the topography of shoreline-like features on the planet. Scientists have studied these features for more than 30 years, and the current study presents a new, alternative explanation for how they formed.

Geophysicists have discovered that irregularities in proposed Martian shorelines might be explained by surface deformation from “true polar wander.” Through this phenomenon, Mars' spin axis and poles shifted by nearly 3,000 kilometers along the surface sometime within the past 2 or 3 billion years. Spinning planets bulge at their equator and solid surfaces deform differently than liquid sea surfaces. As a result, surface topography of the shorelines deformed as the planet’s rotation axis shifted.