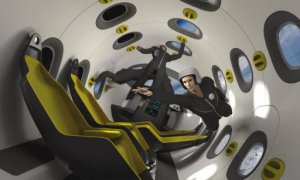 The company believes the space tourism industry could be a multibillion-dollar industry in 20 years, especially as companies continue to develop technology to safely and easily take tourists up on trips. EADS is currently Europe's biggest aerospace company, with the Astrium division being responsible for the space tourism endeavor.

Astrium is best known for creating the Ariane rocket, which is responsible for taking a large portion of commercial satellites into orbit.

The Astrium division plans on carrying space tourists on a suborbital ride higher than 100 kilometers above Earth. The craft will use traditional runways and normal jet engines to take off and climb to 12 kilometers, then the rocket engines would be ignited to take the craft up another 60 kilometers in just 80 seconds. The spacecraft will then coast the rest of the way until it's eventual 100 kilometer apogee.

Each flight will last about an hour and a half. It will have a capacity of only four passengers and it will cost roughly $267,000.