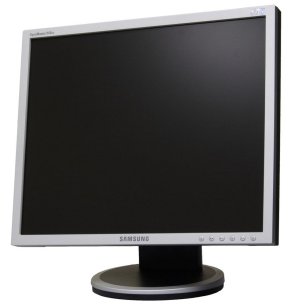 Samsung is one of the first companies to launch an LCD display that doesn't need a graphics card and connects to your PC via the USB bus. X-bt Labs published a review of this display over here.

However, there is no fundamental limitation to transferring video via the USB. Yes, the bandwidth of USB 2.0 (480Mbps) is only sufficient for transferring non-compressed video with a resolution of 640x480 and a frame rate of 60Hz, but why should the video stream not be compressed? There have long been programs for controlling a PC remotely that can transfer the image not only via Ethernet networks but even via ordinary modems. Yes, they can only transfer the elements of the standard graphical Windows interface (because not the image proper, but GDI commands that construct the image are being transferred, actually), so there is no talking about watching movies or playing games, but the fact that graphical information can be transmitted across low-speed networks cannot be denied.

So, the problem is not about the bandwidth of the USB interface, but about a chip that would decode a video stream compressed to such a level as to fit into the available bandwidth. DisplayLink, formerly Newnham Research, took to developing such chips some time ago. Right now they offer two chips, DL-120 and DL-160..

On the downside of the USB connection is the total lack of any 3D acceleration (by the way, we wonder how this monitor is going to work under Windows Vista whose interface requires 3D acceleration). However, the target audience of the SyncMaster 940UX consists of people who want a multi-monitor configuration for little money or within technical limitations. Such people are not supposed to be interested in latest 3D games. And when it comes to work only, the SyncMaster 940UX is going to fully satisfy them.