Darkest of Days details and screenshots

Posted on Friday, Jun 22 2007 @ 03:25 CEST by Thomas De Maesschalck
PhantomEFX is working on a new first person shooter called Darkest of Days. This game starts in the 1800s in the U.S. during the Civil War but the game also teleports you to the future and back to the past. For instance, some levels will take place during the first World War while another level will take place in the ancient city of Pompeii just as the volcano that would cover the city goes off. Seems like this will be a pretty interesting game.

In the middle of the battle your character sees something happen that's totally out of his experience; a portal appears in mid-air with a time traveller coming out. This stranger pushes you through the time portal into the future while he apparently sacrifices himself at the battle. With your player character now in the far future you learn that there is a time war that is being waged as a so-called "evil" group is attempting to alter time in their favor. Naturally you do some time traveling yourself to try to stop these events from taking place. Thompson told us some of Darkest of Days interesting plot twists along the way but we don't think it would be wise to reveal what they have planned in order to keep the surprises intact.

The in-game demo movie we got to see showed off one of the various historical battles your character finds himself in, namely the blood US Civil War battle of Antietam. The map was one large outdoor battlefield as the Union and Confederate armies fired their authentic looking musket out in the open. One of the things that impressed us the most was the fact that there seemed to be hundreds of soldiers on screen at various times which is something that's rate for even the most advanced FPS title. 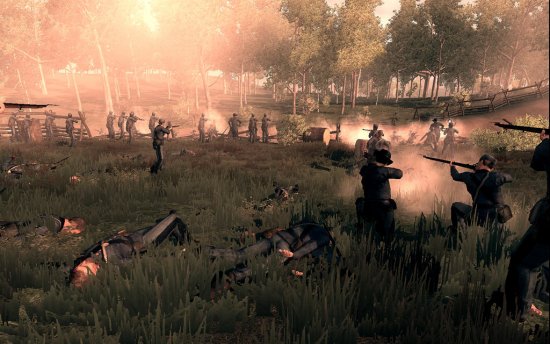 More info at Firingsquad. Darkest of Days should be ready in 2008.