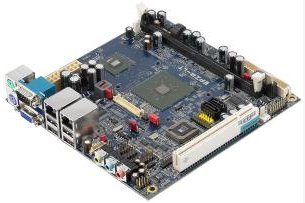 DailyTech writes VIA has launched a new EPIA LT-series motherboard:

The integrated VIA UniChrome Pro II AGP also has hardware MPEG-2 video decoding capabilities. VIA also equips the EPIA LT-series with a VGA output. Users seeking TV-out functionality can opt for a special order version of the EPIA LT-series based on the VIA CX700M2 chipset. However, the TV-out equipped EPIA LT-series are for project-based customers only.

VIA equips the EPIA LT-series with dual VT6107 10/100 Ethernet as well. Customers seeking increased data throughput can opt for the optional VIA VT6122 Gigabit Ethernet controller in place of one of the 10/100 controllers. Other notable features of the EPIA LT-series include two SATA, one IDE, integrated VIA VT1708A high definition audio, one PCI slot, one DDR2-533 DIMM slot and up to four serial ports.