Posted on Wednesday, Jul 04 2007 @ 00:15 CEST by Thomas De Maesschalck
The Insurgency mod for Half-Life 2 is now finally available. This mod has been under development for four years and it's primary concept is to give the player an immersive online combat experience, with an emphasis on teamwork and realistic elements to create intense firefights in detailed urban environments.

The first scenario is set during the present war in Iraq, after the fall of the government and the uprising insurgency that followed as a result.

Insurgency will take you across the modern battlefield, engaging in intense firefights and battles as a member of either a highly organized and equipped conventional force (US Marines), or as an unconventional fighter that uses a combination of firepower and bravery to take on their sometimes overwhelming opponent (Insurgents).

Players will find themselves caught in explosive battles across Almaden, Baghdad, Haditha, Karkar and Ramadi, moving from the dusty, battered streets, to taking cover behind vehicles and inside store fronts. keep your eyes open for the enemy as you and your team seek out to accomplish the mission's objectives. Capturing ground wherever possible, pushing into the front lines and driving the enemy back.

With an urban battlefield, Strong tactics, teamwork, and leadership are essential for victory to be accomplished in the challenge of modern infantry combat. 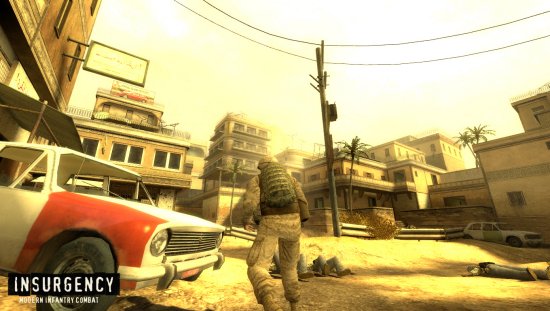