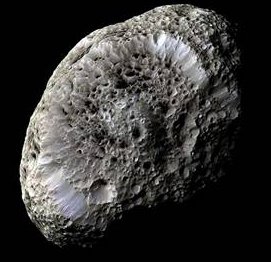 Scientists claim they've solved the mystery of why Saturnus' moon Hyperion looks like a giant sponge:

New image analyses suggest the moon's odd appearance is the result of a highly porous surface that preserves craters, allowing them to remain nearly as pristine as the day they were created.

The finding is just one of several new details about the quirky moon revealed in two studies published in Thursday's issue of the journal Nature. Scientists determined that Hyperion is composed mostly of water ice and that the bottoms of its craters are covered in a dark red gunk that could be the key to resolving some of the moon's other strange properties.

Hyperion is all kinds of weird. It is one of the largest non-spherical bodies in the solar system. The moon is oval-shaped and about 250 miles (400 kilometers) at its widest point. Unlike most of Saturn's other satellites, it is not tidally locked to the ringed planet. Earth's moon is tidally locked, which is why we always see the same face of it. Instead, Hyperion undergoes "chaotic rotation," meaning its axis of rotation shifts so much that scientists can't reliably predict its orientation in space.