Crysis is a next-generation PC first-person shooter from Crytek, the award-winning developers of Far Cry. A stunning technical achievement, Crysis combines incredible visuals, cunning gameplay and an epic story that challenges gamers to adapt to survive.

Global tensions have reached boiling point as the U.S. and North Korea square off in the South China Sea. At stake: a mysterious artifact uncovered by a team of U.S. archeologists.

The North Korean government quickly seizes the area, prompting the U.S. to dispatch an elite team of Special Forces operatives on a rescue mission. During the siege the true nature of the artifact quickly emerges, pointing to the existence of an alien presence on Earth, and ultimately the trigger for a massive-scale alien invasion.

The battle to save Earth begins as the aliens' flash freeze the tropics into a ghostly-white frozen landscape.

As gamers take up arms against the aliens, they will be outfitted with customizable weapons and a high tech Nanosuit, allowing them to adapt their tactics and abilities to a hostile, ever-changing environment and a mysterious enemy. 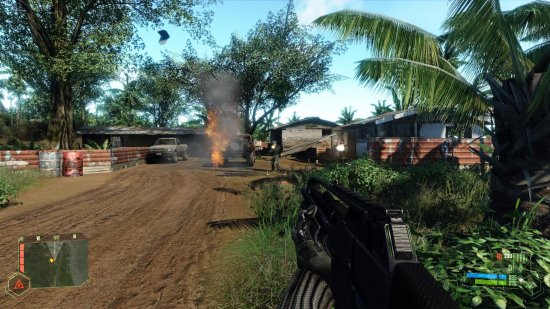