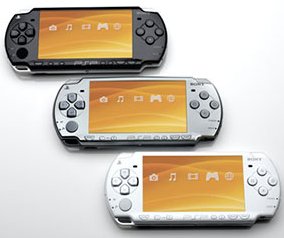 Sony announced new PlayStation Portable consoles at the E3 show. The new Sony PSP will be 33% lighter and 19% thinner.

The device will also feature improved battery life and will be available in three colors: piano black, ice silver and ceramic white.

Sony officials say the new PSP will also load games faster, and it will also feature a video output so users can output video to their TV.

The new PSP will be available in North America in October.