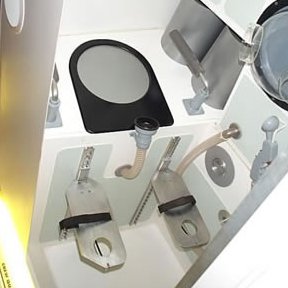 NASA is now the proud owner of one of the most expensive toilets in our solar system. The space agency bought this Russian space toiler for $19 million, claiming this was a lot cheaper than creating it from scratch.

The space station toilet physically resembles those used on Earth, except it has leg restraints and thigh bars to keep astronauts and cosmonauts from floating away. Fans suck waste into the commode. Crew members also have individual urine funnels which are attached to hoses, and the urine is automatically transferred to a U.S. device that can generate potable water.