Posted on Wednesday, Jul 18 2007 @ 21:08 CEST by Thomas De Maesschalck
Later this month you'll be able to see The Simpsons Movie in theaters. A bit less known perhaps is that EA is working on a new The Simpsons game which should be available this Fall, perhaps by the time that The Simpsons movie will head to DVD.

The guys from Firingsquad got to see a demo of this game at the E3 show and also got their hands on ten screenshots.

The level we got to see was titled Medal of Homer and yes, it is a send-up of EA's own Medal of Honor games and the WWII shooter in general. If you want to know the plot (as if it really matters at this point), the Simpsons gang finds themselves in France where they have to collect all 24 white surrender flags in a small village (it's always fun to make fun of the French). The E3 demo saw Homer and Bart try to collect the flags (the game also has Lisa and Marge as playable characters). The demo also showed how the characters can turn into their alter-egos. Bart can become Bartman to leap into the air to get at hard to reach flags. Homer has a rather odd alter-ego; a really large blob that can roll around and flatten enemies. While you can play the game solo with two Simpsons characters at one time the game does allow for a friend to enter for two player co-op action. 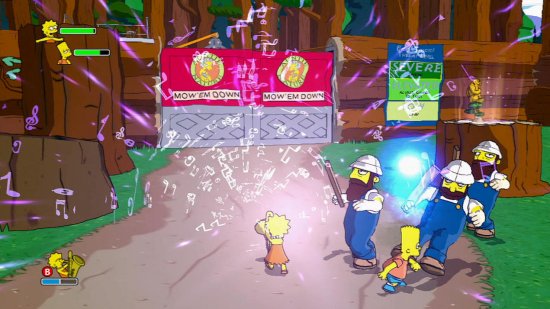