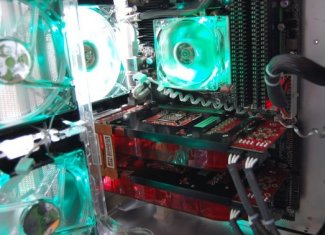 There's a whole lot of cooling going on, thanks to John Woo's new game Stranglehold. AMD is still mum on pricing and final specs, though they did reaffirm their desire to ship this sucker in "early Q4" of this year, so like October? The system managed the Havoc physics engine with ease, jumping into sepia-toned "tequila" time and into a zoom mode that gave a bullet's eye view of the action. Lack of specs notwithstanding, the experience was mesmerizing, right up to the point where one of the bad guys in the game took a bullet in the nuts, and I actually felt his pain.