Posted on Saturday, Jul 21 2007 @ 22:11 CEST by Thomas De Maesschalck
Firingsquad had a look at Haze over at the E3 show last week and published their first impressions:

Our demo actually focused on this latter portion of the game as you take on Mantel forces in a partially blown up building. Because you are off the Nectar you don't have the enhanced abilities that you once did but that doesn't mean you are in trouble. Because the Mantel troops are so dependent on Nectar you can use that to your advantage. Several times in the game you can find yourself being shot by a Mantel soldier but then the game gives you a choice of playing dead. If you do this the soldier will leave you alone since he can't see you anymore under Nectar's influence. This allows you to pull out a knife and take out the drugged up Mantel soldier.. 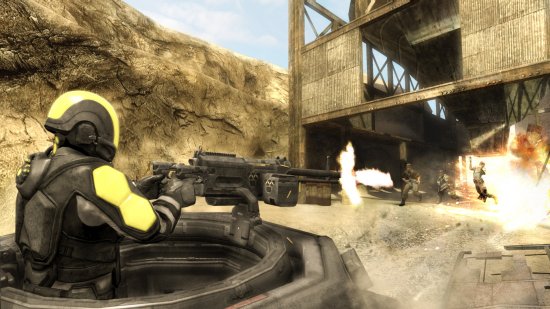