Posted on Tuesday, Nov 04 2003 @ 19:06 CET by Thomas De Maesschalck
Our Sun yesterday erupted three major solar flares, bringing the total number of major eruptions in less than two weeks to nine! With a bit of luck we can again see some very colorful auroras during the next two or three nights! Satellites and power grids could once again be put at risk.

All flares of this magnitude are capable of disrupting communications systems and power grids and harming satellites. For example two Japanese satellite failures were blamed on the first six storms.

The new flares were accompanied by coronal mass ejections of charged particles that take anywhere from 18 hours to two or three days to reach Earth. These CMEs represent the brunt of the storm unleashed by a flare.

The fist flare Sunday was generated by Sunspot 486, which was the site of last week's major storms. The one late Sunday came from Sunspot 488, which is huge but has not been a major player until now. Monday's flare also leapt from Sunspot 488.

Both sunspots are about to rotate off the right side of the Sun's face, so their associated CMEs were not aimed squarely at Earth. However, these clouds of hot gas expand as they race into space at up to 5 million mph, so at least some effect at Earth is predicted.

Sunspots are dark, cooler regions of the solar surface. They are areas of pent-up magnetic activity, caps on upwelling matter and energy that can blow at any moment. No scientist can recall nine X-class flares ever occurring in a 12-day period. More major flares are possible this week, forecasters said.

Here is a picture from the SOHO satellite of an impressive solar eruption on Monday the 3th of november 2003 : 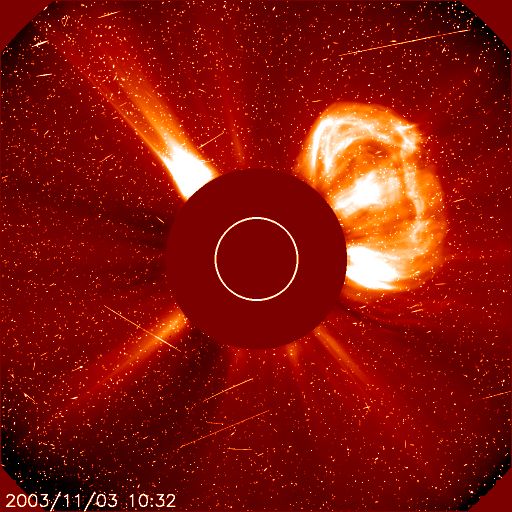 Damn that eruption on the right is HUGE.