Posted on Wednesday, Aug 01 2007 @ 08:27 CEST by Thomas De Maesschalck
IGN had an interview with Magnus Jansen, the lead designer of World in Conflict:

IGN AU: We've all seen the game in action and the graphics are mind-blowing. Without going into too much techie speak, what features of the engine make the game look so far ahead of the competition?

Magnus Jansen: We were standing on top of the old Ground Control 2 engine, which, while it has been replaced - every single line of code - is standing on the shoulders of giants in that sense. We knew exactly what we needed to do, and throughout the three years of production we just gradually replaced whatever we needed to make that next leap.

It's an evolution, not a random revolution, where you may or may not end up at something that the game needed. We've taken everything in the old Ground Control engine, and everything is lit the same way, and we tried to apply to the same lighting to everything. Then we put in small systems, with the free camera, where you can actually see the horizon all the time - we really use the horizon in the game, you don't play from an isometric view. So we had to have large draw distance, we had to have clouds, and fog actually makes a difference - not fog in the sense that we hide things, but fog in the sense of an atmosphere. Those things, and the 3D clouds, that makes sense in an RTS engine for once. So those things we worked a lot on, because there's a lot of bang for buck.. 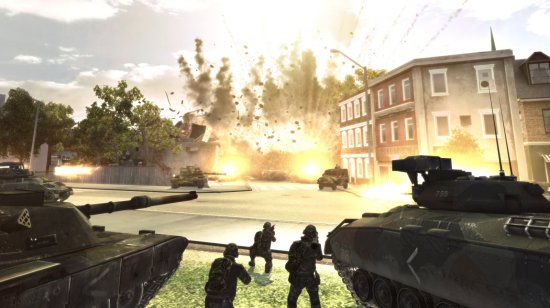