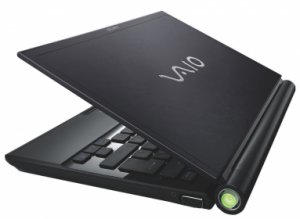 Sony unveiled the first VAIO notebook which uses a SSD, the TZ18GN. This is a low-weight 1.2kg 11.1" notebook with a battery life of 11.5 hours.

After playing with the TZ18HN for a few minutes I have to admit it's one sexy notebook. It's incredibly light and small (227 x 22.5 x 198mm) and is built around a carbon fibre frame. The only problem is the price - at $4299 you can easily find more powerful, higherspec'd computers on the market. But doing so won't get you bragging rights about having the first flash-based notebook on your block.

The TZ18HN, like the whole TZ Vaio range, sports a crisp little 11.1" display with a resolution of 1366 x 768, which is probably all you'd want on a screen so small. Unfortunately, the TZ18HN doesn't ship with a built in Blu-ray burner like its bigger cousin the VGNFZ18G but still has a built-in 8x DVD DL drive. It comes with a 1.2GHz Intel Core 2 Duo and ships with a standard 1GB of main memory (expandable to 2GB) and Windows Vista Business . It's also got all the standard ports, networking adaptors, and includes a fingerprint scanner and a Motion Eyeweb-cam.