Posted on Friday, Nov 07 2003 @ 22:35 CET by Thomas De Maesschalck
AMD has updated their processor roadmaps. The new roadmap shows their current CPU plans till 2006. As you can see they are slowly moving towards the 90nm process.

During the first half of 2004 AMD will launch the Newcastle, this is a stripped down version of the Athlon64 with only 512KB L2 cache.

In the second half of 2004 we are starting to see some processors made on the 90nm SOI process. Only the extremely stripped down Athlon64 'Paris' which has only 256KB L2 cache and no 64bit support is still made on 130nm. Just as the Dublin, a mobile chip which will replace the AMD Athlon XP-M. The server market can expect three new cores called Athens, Troy and Venus. For the desktop market they will also release the San Diego and the Winchester. The San Diego will replace the current Athlon 64 FX, and the Winchester is going to replace the Newcastle. For the Mobile market they have the Odessa and the Dublin. 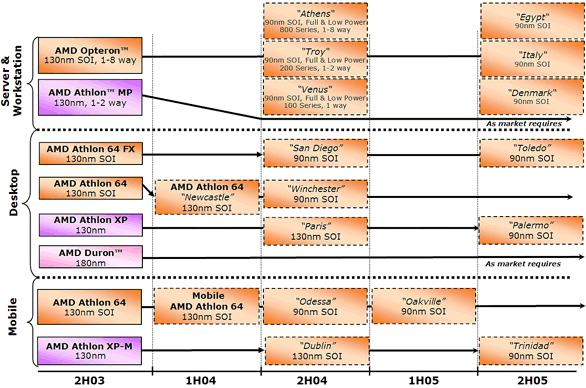