Intel's upcoming Penryn processor will be more than just a 45nm die shrink of its current 65nm processors, the new refresh will feature several tweaks to offer more performance at the same clockspeed as the current Conroe processors.

The mobile Penryn chips will feature new power saving technologies like a deep power down state which lowers the CPU core voltage, more so than in the C4 state, and turns of the L1 and L2 caches. This should offer a nice increase in battery life. 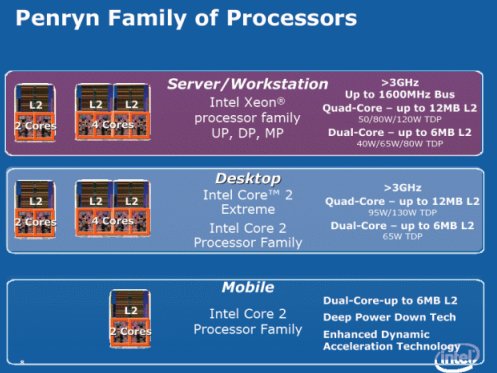 Penryn will be succeeded in 2008 by Nehalem. Other future CPUs from Intel include Westmere, a 32nm version of Nehalem, and Sandy Bridge, which will be a new 32nm architecture.