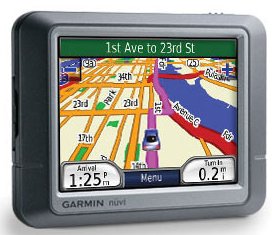 Like other products in the nuvi 200-series lineup, the nuvi 260 offers budget savvy consumers the benefit of a premium in-dash system at a fraction of the cost. In addition to features offered by other members of the nuvi 200 family, the nuvi 260 automatically calls out street names (saying "turn right on Main Street" instead of "turn right in 200 feet."). This feature lets drivers keep their eyes on the road letting drivers keep their eyes on the road while navigating through busy traffic and tricky roadways.

"Many potential PND customers want an entry-level Garmin PND, and many realize the convenience and utility of a device that speaks an upcoming street name. The nuvi 260 is for them," said Dan Bartel, Garmin's vice president of worldwide sales. "The nuvi 200-series has established itself as the gold standard for simple yet solid navigation, and the nuvi 260 only reinforces that."

The nuvi 260 incorporates an internal GPS antenna that makes it thinner and even easier to mount in a car. The intuitive "Where To?" and "View Map" welcome screen allows users to quickly find a specific street address or establishment's name, or search for a destination by category. Turn-by-turn, voice-prompted directions then guide the driver to their destination. If they miss a turn along the route, the nuvi automatically recalculates a route and gets them back on track, pronouncing the names of the streets along the way. The nuvi 260 includes preloaded detailed mapping of the entire United States, Canada, and Puerto Rico -- with approximately six million points of interest (like hotels, restaurants, ATMs, gas stations, and more).

The pocket-sized nuvi 260 also includes a built-in picture viewer, calculator, currency converter, unit converter and world clock. These new navigators are also compatible with Garmin's line of rich content such as the Garmin Travel Guide and Garmin SaversGuide. For additional security, Garmin has included the Garmin Lock, an innovative patent pending theft prevention system that disables the unit from performing any functions until the user types in a specific 4-digit PIN or takes the unit to a predetermined secure location. Garmin has also added the ability for customers to augment the preloaded maps with custom points of interest (POI's) from third parties such as school zones and safety cameras.

About the size of a deck of cards, the nuvi's focal point is its bright 3.5-inch (diagonal) touchscreen. The unit's only button is an on/off slider bar, which may be locked to avoid being turned on or off accidentally. The nuvi also has a convenient SD card slot for expandable memory.

The nuvi 260 is expected to be available in August 2007 at an MSRP of $499.99. The nuvi 260 includes a vehicle suction cup mount, vehicle power cable, dashboard disk, and owner's reference manual.