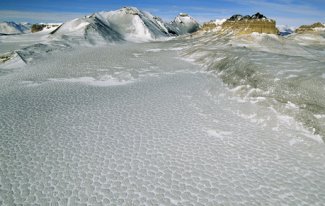 >i>"We think that they were pretty much locked in a frozen, inanimate state for that period of time," said lead study author Kay Bidle, a marine microbiologist at Rutgers University in New Brunswick, New Jersey.

It's also possible that some of the microbes were capable of maintaining their metabolism within tiny droplets of water suspended in the ice, Bidle said.

Bidle and colleagues retrieved and revived two samples of bacteria from the glacial ice. The first was a hundred thousand years old, and the second was around eight million years old.

The eight-million-year-old bacteria were alive, but barely.

Their genes were severely damaged from long exposure to cosmic radiation, which is higher at Earth's poles.

The radiation bombarded the bacteria's DNA with high-energy particles, which broke apart the DNA's chemical bonds and hacked it into shorter pieces.

The article also predicts that as glaciers and ice caps melt some of those million year old bacteria may be flushed into the ocean and get incorporated in today's marine microbes, potentially creating new and dangerous diseases. More info at National Geographic.