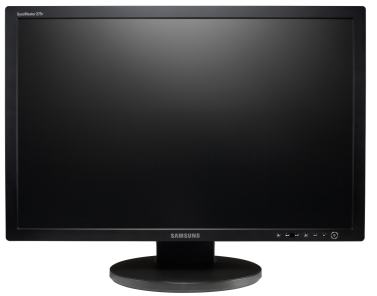 Looking for a new big LCD display? Check out this review at ExtremeTech, they took a look at the new 27" Samsung SyncMaster 275T.

Not everyone has the desk space for a 30-inch LCD monitor like Dell's UltraSharp 3007WFP or HP's LP2065. Not to mention, that big 2560x1600 resolution is a lot of pixels for your 3D graphics card to drive. On the other hand, some people want a bigger screen than the many 24-inch models on the market. If you want something in-between, new 27-inch LCD monitors could be just the ticket. Featuring a resolution of 1920x1200, these displays are very large, but not quite as overwhelming as 30-inch monitors.

Samsung has just released a contender in this category, the SyncMaster 275T, and the unit is loaded with outstanding features like multiple USB ports, six-color hue/saturation adjustment, and component video input. The SyncMaster 275T can be found online for roughly $1,100–1,200, making it about the same price as Dell's 30-inch 3007WFP (and for that matter, the same as Dell's 27-inch model).

Overall they really liked this LCD display, calling it one of the best PC monitors they've ever seen. The 275T has a very good color gamut, fast response times, great gamma curve and uniform lightning.