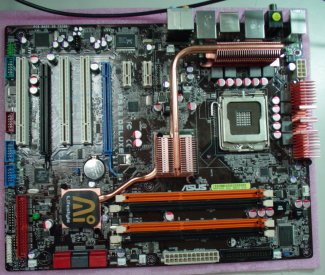 A photo of Asus's upcoming Intel X38 Express based P5E3 Deluxe motherboard has been leaked on the Internet. This motherboard features support for all LGA775 socket processors, including the upcoming 45nm Penryn chips, and only accepts DDR3 memory.

Although Intel removed IDE support from the ICH9R, ASUS opted to equip the P5E3 Deluxe with an Agere controller for a single IDE port. Other notable features of the P5E3 Deluxe include onboard high-definition audio, Gigabit Ethernet and six SATA 3.0 Gbps.

The Asus P5E3 Deluxe will be available in retail stores next month but DailyTech says the layout may differ a bit from the one you see on the photo as Asus is still thinking about which heatpipe solution it will use for this motherboard.