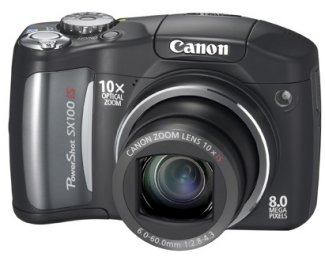 In addition to its powerful zoom lens, the PowerShot SX100 IS digital camera is loaded with a full complement of performance and convenient features that camera aficionados have come to expect from Canon – 8.0 megapixel resolution for crisp, vibrant images, a DIGIC III image processor for speed, power and performance, Canon's Genuine Face Detection Technology (with Face Selector capability), a large 2.5-inch LCD screen for easy image previews and reviews, and much more.

This technology, coupled with a 10x optical zoom and OIS, enables soccer moms who are perched in the bleachers to have the ability to shoot photos of their superstars playing on the field that will look like photos taken from the sidelines. Alternatively, a parent sitting in the balcony with their sights set on capturing their little ballerina's face as she pirouettes through the air for the first time can easily keep the focus framed on their daughter's moving image throughout the performance. And, since the PowerShot SX100 IS Digital Camera is part of Canon's "A-Team" (powered by AA batteries), it's quick and simple to power up.

Though simple to operate, the PowerShot SX100 IS digital camera offers photo enthusiasts many creative possibilities, including the ability to shoot VGA movies of the very highest quality. In fact, the PowerShot SX100 IS provides two VGA 30 fps recording modes: Standard mode for maximum image quality, and the new 640 LP mode for maximum recording time and reduced file sizes. In either mode, the PowerShot SX100 IS can capture individual movies up to one hour or 4GB per clip, whichever comes first. Budding filmmakers simply switch to movie mode to capture video more easily than ever before, and then clearly view it on the bright 2.5-inch wide-angle LCD display or through a connected TV set or video monitor. Movie clips can also be uploaded to compatible personal computers for sharing on the World Wide Web.