Posted on Sunday, Nov 16 2003 @ 22:06 CET by Thomas De Maesschalck
Nasa released what is according to them the best picture of Jupiter ever a few days ago, this picture is taken by the Cassini spacecraft on Dec. 29, 2000. The photo is composed out of 27 pictures and is taken from about 6.2 million miles (10 million kilometers) away from the big gas planet.

This true color mosaic of Jupiter was constructed from images taken by the narrow angle camera onboard NASA's Cassini spacecraft starting at 5:31 Universal time on December 29, 2000, as the spacecraft neared Jupiter during its flyby of the giant planet. It is the most detailed global color portrait of Jupiter ever produced; the smallest visible features are ~ 60 km (37 miles) across. The mosaic is composed of 27 images: nine images were required to cover the entire planet in a tic-tac-toe pattern, and each of those locations was imaged in red, green, and blue to provide true color. Although Cassini's camera can see more colors than humans can, Jupiter here looks the way that the human eye would see it. 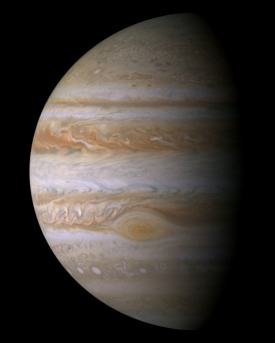