Posted on Thursday, Aug 23 2007 @ 01:05 CEST by Thomas De Maesschalck
VIA presents its new, small pc3500 motherboard which features DirectX 9 support and is capable of running Windows Vista. The motherboard features an embedded 1.5GHz VIA C7-D processor and according to VIA a full system build around this motherboard with 512MB DDR2 RAM, 80GB Maxtor HDD a DVD combo drive and a Teamwork 180W PSU will use less than 25W in idle mode, while consuming only 34.48W during DVD playback.

The VIA pc3500 is the latest addition to the energy efficient VIA pc-1 Mainboard line, and is based on the VIA CN896 digital media IGP chipset, certified by Microsoft for Windows Vista Basic and featuring the VIA Chrome9 HC IGP with a DirectX 9.0 3D accelerator for high performance, a 2D accelerator for productivity applications, and the Chromotion 3.0 video display engine for advanced hardware-based video processing. Combined with the power efficient VIA C7-D processor supporting the 400MHz VIA V4 bus, the VIA pc3500 mainboard delivers high performance and a rich digital media experience at an average power consumption of less than 25 watts.

The VIA pc3500 Mainboard features two DDR2 DIMM slots, supporting up to 2GB 400/533/667MHz memory, and provides additional expansion flexibility with its PCI Express x16 slot and PCI slot. The board also comes with a full set of connectivity features, including four USB 2.0 ports, two SATA II/PATA connectors, 10/100 Ethernet, and eight channel onboard audio. Additional options include support for Gigabit Ethernet and S-Video and S/PDIF audio.

“With the launch of VIA pc3500 mainboard we are leading the way in developing innovative low power platforms that enable our OEM and SI customers to meet the growing worldwide demand for energy-efficient PCs,” commented Richard Brown, Vice President of Corporate Marketing, VIA Technologies, Inc. “Consumers and business users who purchase PCs based on the VIA pc3500 mainboard will not only be able to significantly reduce their energy costs but also minimize their environmental impact while running all the latest software applications.” 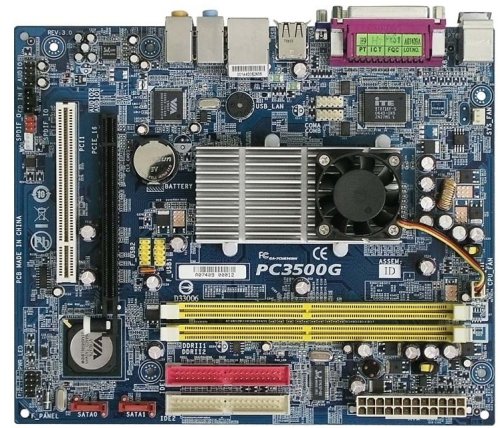