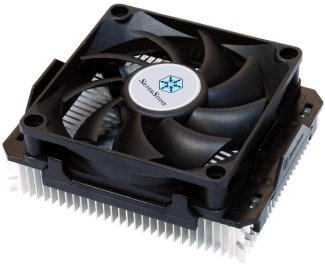 SilverStone presents its SST-NT07-Pro, a cooler designed for Intel's mobile Socket 478 and 479 processors.

While CPU-Coolers for MoDT (Mobile on Desktop) processors where mostly produced for servers in the past, there was no need to make them silent and small. But for the home entertainment sector it was desperately needed. SilverStone must have known about this lack and launched the NT07-Pro in August this year – especially made for requirements of Home Theatre use: It is small and silent. With a very efficient 70mm fan the NT07-Pro is of very small 35mm height (NT07 is just 5 mm higher). The new cooling design makes this CPU-cooler also perfect for modifications and use in small space applications, without lowering performance and with a silent operation.

Another feature is the production: Typical for SilverStone the NT07-Pro is made of one aluminum block, what allows it to guarantee the same heat absorbing ability like other, much bigger mobile CPU-coolers.

The heatsink features a copper base with aluminum fins and weighs 160g. The cooler will be available for 16.90EUR.